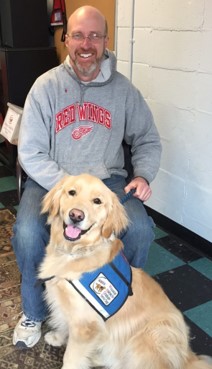 When not chaperoning a WAGS dog to the bookstore, bakery, or bank, you can find Rob dangling from the top of a ladder in a dark theatre, burning prairies, delivering flowers, or at his laptop diligently researching the next can’t-miss prospect for his fantasy baseball team.  He and his canine pals live in idyllic Baraboo, where current trainee Zoey longs to play centerfield for the Thunderbird softball team.

Why WAGS? I was introduced to WAGS by a co-worker at the International Crane Foundation who was matched with a dog after she developed MS.  Because I like to take extended bicycle trips, working with WAGS is a great way to enjoy the company of a dog for short periods while still providing a valuable service to others.  It’s also nice how everyone in the community seems to become more patient and forgiving when you are training a dog, especially at the store when they are a little over-zealous with their grip on that carton of half-and-half or quart of motor oil!

Favorite Memory? My first dog, Arty, and I made several presentations to elementary schools.  The act which always generated the most excitement among the kids was when he would tug off my socks!  It’s really gratifying to see how awareness and proper etiquette around service dogs has improved since that time, especially among children.  And we won’t mention the time in the car that Arty ate my sister-in-law’s huge double-chocolate fudge brownie!